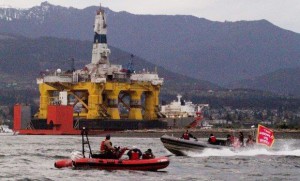 Attorneys for Royal Dutch Shell PLC presented testimony to a federal court judge that the company needs safety zones around its Arctic drill fleet to prevent Greenpeace USA activists from endangering company workers and themselves.

An attorney for Greenpeace told U.S. District Judge Sharon Gleason that Shell’s request would usurp the maritime authority Congress gave to the Coast Guard and harm free speech rights of Greenpeace activists, who have the right to approach Shell vessels to draw attention in harmful drilling in the Arctic.

Arctic drilling is strongly opposed by conservation groups, including Greenpeace, that say, polar regions are being hammered by climate warning at twice the rate of the rest of the planet and would be severly harmed by industrial development. The group say oil companies have not demonstrated the ability to clean up a spill under the best of circumstances, much less in remote, cold waters far from infrastructure such as ports and Coast Guard bases (Source: The Associated Press).