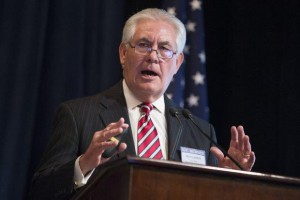 ExxonMobil CEO Rex Tillerson delivers remarks on the release of a report by the National Petroleum Council on oil drilling in Arctic, in Washington (Associated Press File Photo)

The Arctic is the next great frontier for oil and gas – and one of the most environmentally fragile places on earth.

An Energy Department advisory council study adopted last week said the US should start exploring for oil and gas in the Arctic soon in order to feed future demand, and that the industry is ready to safely exploit the Arctic’s huge reseves, despite recent mishaps.

In an exclusive interview with the Associated Press, ExxonMobil CEO Rex Tillerson, who led the committee that produced the report, talked about why he thinks Arctic exploration is worth the risk. Exxon has decadeds of experience working in that part of the world, including successful projects in Russia – but also a catastrophic oil spill in Alaska’s Prince William Sound when the Exxon Valdz oil tanker ran aground in 1989.

Below are excerpts of the interview, edited for length and clarity for Energie Vision readers.

Tillerson: There are two important elements for people to understand. One is the timelines that are required. Anytime you are dealing in these frontier areas where you are really driven by technology, these are very long time frames, multi-decades time frames.The second element is just the enormity of the energy demand in the world. It’s between 85 and 90 million barrels of oil per day today. That takes huge resources to supply that in a reliable way. We are in the depletion business. There will come a time when all the resources that are supplying the world’s economies today are going to go in decline. This will be what’s be needed next. If we start today it will take 20, 30, 40 years for those to come on.

AP: Why the Arctic?

Tillerson: The size of the resource prize has to be large to support the risked capital that has to be put in place. The Arctic is one of the few places left when we believe those opportunities exist.

AP: Environmentalists would also say that it’s one of the last few places left that are unspoiled. Why not leave it alone?

Tillerson: Because eventually we are going to need it. It’s back to that insatiable appetite that the world has for energy. Oil demand is going to continue to grow as populations grows. If you look out 25 years from now we are going to have another couple of billion people on the planet, we are going to be at 9 billion people. Something like 3 billion are going to move from poverty into middle class status. When they do that, the energy demand goes up enormously. As we move out into the middle of this century our outlook shows you are going to need those resources even with a lot of other alternative forms of energy continuing at a fairly agressive growth rate.

AP: Why put your company’s reputation at risk, escpecially after Valdez?

Tillerson: Valdez was a devasting experince for our corporation. What emerged from that was a commitment to develop a systematic approach to managing risk in advance. Since Valdez we have gone into some very challenging environments and we have been very successful in developing those using this aporoach, which identifies the risk, takes steps to mitigate that risk but then recognize importantly that you cannot eliminate that risk. None of us live in a zero risk world. We do not think it’s a appropriate nor do we think it’s what our shareholders want for us to walk away from something because we had a bad experience. Rather, we choose to take that challenge go on, and we have.

AP: Shell thought it understood the risk of drilling offshore in the Arctic, but then almost immediately hat problems when it began work in 2012. How can we be sure that industry is really ready?

AP: Given these inescapable human factors, is the Arctic too fragile to expose to this kind of risk?

Tillerson: Well you could say that about, pick another environment that’s important to people, the Guld Coast estuary environment. We have that challenge anywhere and everywhere. But puck another activity and I could ask the same questions. Do you get on an airplane? You are subjecting yourslf to human error. Why do you get in your automobile every day? There has been Arctic development since the 1920s. Imperial Oil, our affiliate in Canada, was the first, in Normen Wells. There’s bee a lot that we have already done and demonstrated we can do.

AP: You can look for oil almost anywhere in the world. How does the US Arctic compare to other opportunities you have?

Tillerson: The U.S. is important to us but we’re not the ones deciding how to go about that. The leasing plan dictates that, the regulatory framework dictates it, and today we find it very difficult to work in the U.S. arctic because of those two factors. Other countries are taking a different view and they are moving ahead.

AP: Can you give an example of why it’s so tricky to drill in the Arctic?

Tillerson: It may take you severel years to have a good understanding of the ocean conditions both at the surfaces and at he the subsurface. For example, the pipeline that run from those Arctic facilities to the shore have to be buried at a sufficient depth below the seabed so ice gouging doesn’t damage them. If you have an iceberg coming along it’s digging into the floor. And we collect enormous amounts of data so we know we are well below the gouging depth. It takes a lot of people out there gathering data in some pretty crummy conditions. I have some wonderful pictures of some of our early research people offshore Skhalin Islind in the Russian Arctic, climbing around on this ice that is moving and they are taking measurements because they are trying to figure out how deep the gouging is. You have to get the data.

AP: How can you try to convince people that this is the right thing to do?

Tillerson: First we try to work at a very broad context so the American people understand this is important to them. Obviously we’ve got a huge economy here that has to be fed. If we stopped today, everybody’s lights would be going off before not too long, because there would not be anything to fuel that. When we are trying to influence policy and regulations, it’s really around how do we get the right regulatory and fiscal regime in place that allows us to continually do what we need to do, which is replace all of this, and sustain it, and grow it for the future economic growth and demand that we know is coming.