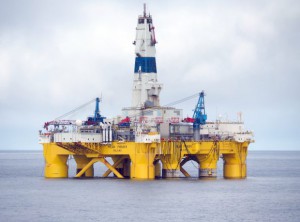 The US Bureau of Safety and Environmental Enforcement granted Shell a modified deep drilling permit that had previously allowed the company to drill only the top section of the well, one of six that Shell plans for its Chukchi Sea Burger prospect. The modification was granted once the key Shell support vessel, the Finnish icebreaker Fennica, arrived at the drilling site and was placed in position to respond to a possible emergency. With the Finnica on-site, Shell has now fullfilled its responsibility for amassing safety equipment at its Burger J well and is cleared to beginn drilling to „total depth“, into oil-bearing zones deep below the ocean surface.

The oil industry and the Department of Interior have characterized the Arctic outer continental shelf as a highly promising oil frontier. The Bureau of Ocean Energy Management, the sister Agency of the Bureau of Safety and Environmental Enforcement estimates that the US portion of the Chukchi holds 15.4 billion and the US portion of the Beaufort holds 8.2 billion barrels of recoverable oil (Source: Associated Press)